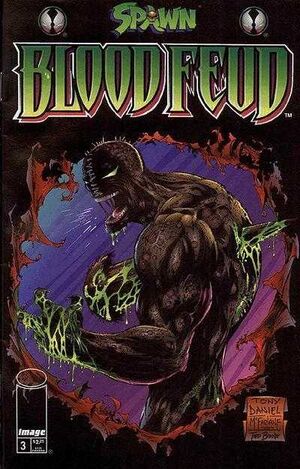 The bums light Spawn on fire after not going down with a stake through the heart. Spawn runs towards water to put the flames out. As he does, he wonders what's gone wrong with his life. His bum friends are trying to kill him, the CIA friend Groenfeld turned on him, the media thinks he's a vampire, nothing goes right for him he thinks. As he jumps in the water, he remembers that his suit was buried here. The suit breaks free from the chest and comes for him to be bonded again for life.

Burned, exhausted and nearly drowned, spawn heads for two sewer pipes to rest. Upon hoisting himself into them, he sees the Clown waiting for him. Spawn assumes a defensive gesture and asks if he's going to kick him off a roof again.[1] Spawn soon learns Sansker published articles on him being a Werewolf and he's also on the run.

At the New York City Police Department, Sam Burke asks Twitch Williams if he thinks Spawn was involved in the blood bank robberies. He still can't shake the issue that the victims didn't have their bodies drained of blood.

Violator explains the K7-Leetha is a pure-bred and feeds off of souls. He tells him that the blackouts were probably caused by her breeding cycle and that there's no way he's a vampire since he's already dead.

Twitch Williams is researching John Sansker's past. He finds articles going back 50 to 300 years in the past. He realized John Sansker may be an immortal vampire himself. Suddenly, Twitch is surprised by Sansker appearing behind him and catching him in the act.

Spawn begins rethinking his decision of dumping the suit. He finds himself exhausted without and thinks about how Violator said it was symbiotic. He uses Necroplasm to spruce up a car for him to take to the wharf where he left his suit.

Burke walks into Sanskers office to tell him a sighting has been made of Spawn. As Sansker leaves, Burke sees a trail of blood coming from a locker. He opens it to find his partner Twitch a blood mangled pretzel.

Sansker pulls over Spawn's car in the police helicopter. He leaps out to attack Spawn who looses control of the car and finds himself hurled into the water.

Retrieved from "https://imagecomics.fandom.com/wiki/Spawn:_Blood_Feud_Vol_1_3?oldid=42862"
Community content is available under CC-BY-SA unless otherwise noted.