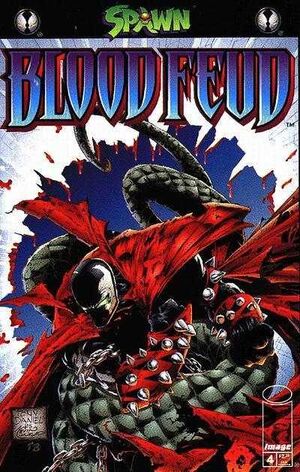 As Spawn drowns, he frantically searches for his suit as he realizes he now needs its power. Spawn swims to the trunk and unleashes K7-Leetha to be reunited once again.

Sam Burke pulls up to the dock where John Sansker just threw the Spawn in. He hears over the radio that Twitch Williams is in the hospital and not doing well. Sam tells Sansker to freeze and put his hands behind his head. Sansker reveals he's a vampire that was born in 1082 France. He takes off his clothes as he attacks the officers.

As Sansker is about to kill Sam, Spawn springs out of the water and saves his life. Sansker laughs and tells him New York City was only a trial run before he takes Hong Kong. As the sun comes up, Sansker takes off and says he'll see him in 2010 in Hong Kong.

When the police back-up arrive, Sam asks Spawn to stay and he'll help make it right. Spawn dives into the water and runs from everyone.

Retrieved from "https://imagecomics.fandom.com/wiki/Spawn:_Blood_Feud_Vol_1_4?oldid=42863"
Community content is available under CC-BY-SA unless otherwise noted.