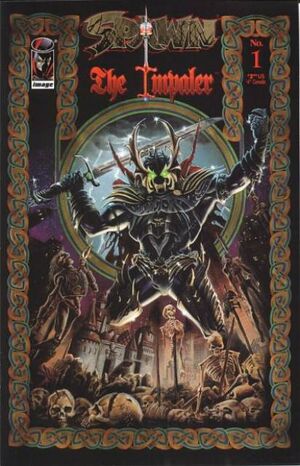 In 15th Century Romania, the nearby Serbians attacked led by Kazakla Bey on Prince Vlad Tepes. His castle was burned and people raped and murdered.

In modern day, Abbie Carfax and her friend Tiff were attacked by five street thugs. Spawn the Impaler saves her from the criminal by impaling them with pipes and wood shanks.

Abbie returns to her parents house to learn a man named Drake is moving in next door. She finds him attractive and is drawn to the mysterious man next door.

Retrieved from "https://imagecomics.fandom.com/wiki/Spawn:_The_Impaler_Vol_1_1?oldid=42854"
Community content is available under CC-BY-SA unless otherwise noted.