"The Doorway to Nowhere" 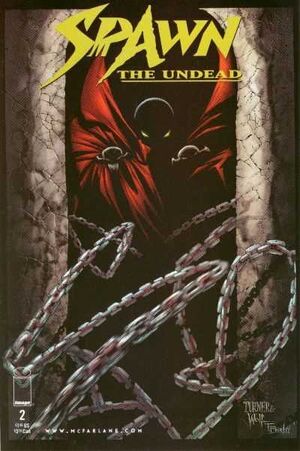 Appearing in "The Doorway to Nowhere"

Plot Synopsis for "The Doorway to Nowhere"

Travis Ward heads to Long Duck Dong's. He catches a glimmer of Spawn behind him but Spawn takes off as he enters the building. Inside, Travis meets Shiela. He begins telling her that he's gotten into trouble with the occult. He's summoned a demon named Hakeldama.

He traded his soul for all of its knowledge while alive. After the demon agreed, he asked how can he avoid damnation. He was told a Hellspawn would come for him and he must not walk through the gates of hell when the time comes.

In the present, He tells Shiela about his plight. Hellspawn have existed for years in the corners of the world's most powerful men. He tells her recently he's started seeing his own and sought Hakeldama for assistance. He was shocked when the demon said he can't stop him and that this Hellspawn doesn't play by the rules.

Shiela has enough and ushers Travis to a cab. Travis gets in and doesn't realize the Hellspawn played with his mind and the cab is taking him to hell.

Retrieved from "https://imagecomics.fandom.com/wiki/Spawn:_The_Undead_Vol_1_2?oldid=42843"
Community content is available under CC-BY-SA unless otherwise noted.