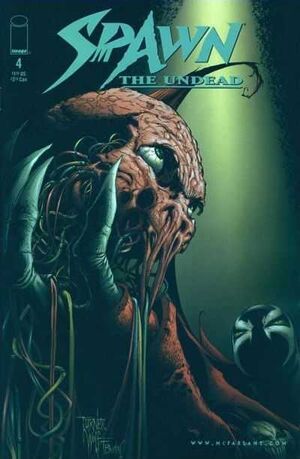 Song Sung Bloo leads a church of cult followers to give up their worldly possessions to join his cult. He speaks with the Great Akron presence from being to his followers. One follower tells him he's recently scene a man in red and black. Other followers all pitch in and say they've seen him as well. Bloo orders then to give him their watches and weirdly possessions as penance.

Elsewhere, Angels watch from a distance and believe Spawn is onto them. They worry his he could possibly know their plan.

That night, Bloo walks in to find a skull flows and shines in front of his cult followers. He attempts to translate it for his cult followers but it's gaming being a miracle worker and browns concerned actually miracles are occurring. Spawn appears to him that night and tells him the angels are messing with him.

The next day, Bloo has everyone drink spiked koolaid in a mass suicide.

Retrieved from "https://imagecomics.fandom.com/wiki/Spawn:_The_Undead_Vol_1_4?oldid=42845"
Community content is available under CC-BY-SA unless otherwise noted.