"The Wind that Shakes the Barley" 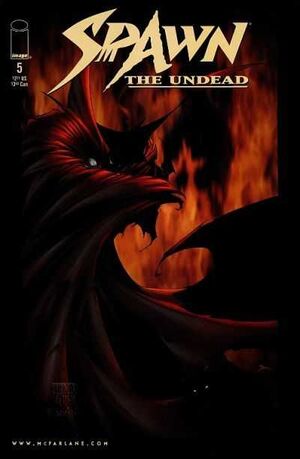 Appearing in "The Wind that Shakes the Barley"

Plot Synopsis for "The Wind that Shakes the Barley"

Richard Doyle suits in his wheelchair. He recalls his wedding day and wife, Amy. He loved her more than anything but when they were fighting on the car one evening they ended up in an accident where he became paralyzed, and Amy died.

He recalls waking up in the hospital to have his dead tell him he was drunk while driving. He tells him he'll never do anything by himself again. They gave him a cat to help.

Spawn appears and tells him the car is Amy. She traded her soul to come back to him but she was tricked and now will end up in hell as all cats do. He brings Richard to the cliff where Amy died, he tells her this is his chance at redemption.

Retrieved from "https://imagecomics.fandom.com/wiki/Spawn:_The_Undead_Vol_1_5?oldid=42846"
Community content is available under CC-BY-SA unless otherwise noted.