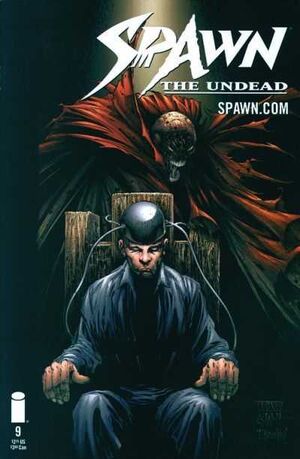 Appearing in "Waiting for Sparky"

Plot Synopsis for "Waiting for Sparky"

Rumeal Lincoln sits in prison on death row. He recounts his story as he waits for his turn to die. He remembers stumbling upon a woman laying out in the sun at a fancy home. He broke in and when she started to scream, he pulled a gun and killed her.

In the present, he thinks about how many prisoners have begun to see 'ol sparky' wandering around the prison late at night. When Lincoln was brought to the electric chair, Ol Sparky asked him for remorse.

The execution is cancelled and he's brought back to his cell where he accepts he's in prison for doing back things.

Retrieved from "https://imagecomics.fandom.com/wiki/Spawn:_The_Undead_Vol_1_9?oldid=42850"
Community content is available under CC-BY-SA unless otherwise noted.