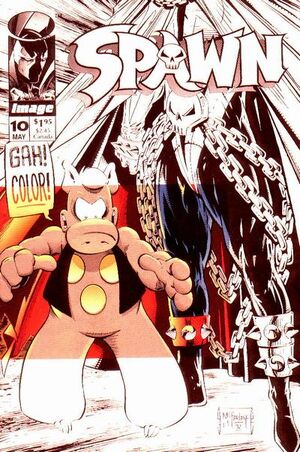 Appearing in "Crossing Over"

Plot Synopsis for "Crossing Over"

When Spawn tries to examine Angela's abandoned lance, it transports him into a realm beyond his wildest imaginings. While in this strange world, Spawn encounters imprisoned heroes, faces a mockery of Blind Justice in the form of the Violator, and glimpses a dreamlike scenario of happiness for him, Wanda and Cyan.

He witness captured heroes who plead to take their power. They reach out from a prison with men tied and bound with rope and burlap sacks covering their faces. Cerebus explains these are comic creators who have sold the rights to their creations and they are now held powerless.

Retrieved from "https://imagecomics.fandom.com/wiki/Spawn_Vol_1_10?oldid=68321"
Community content is available under CC-BY-SA unless otherwise noted.