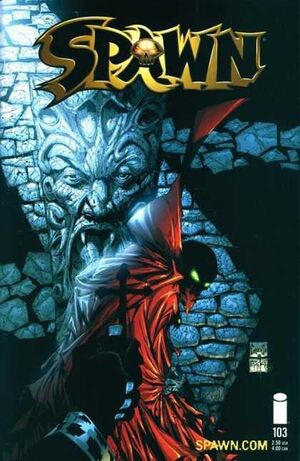 In San Francisco, a wealthy stock broker, Eric, barks commands about minuet details of a car he's buying on the phone. A woman offers him gratitude by offering him a rose but he turns it down as it does not hold anything of value. The man arrives at a specialty shop where he's taken into the back and shown rare and expensive Nazi paraphernalia. One item is a lamp made out of human skin. He agrees to buy the lamp and takes it home. That evening, Spawn watches over him from the shadows.

The stock broker had dreams that evening of being a Nazi supporter. He saw gypsies pouring into a concentration camp as Colonel K welcomed his family to visit. One woman had a tattoo the same as the markings on the lamp. He attempted to show a Romany Woman kindness and asked her for affection. She rejected him and walked out on him. He realized he has taken horrible advantage of others. In his dream Spawn approached him and threatened him.

He wakes up in a cold sweat to realize it was all a bad dream. He heads out with a shovel to bury his guilt and grabs a hold for the lamp. Later that night, a rose grows out of the spot where it was buried.

Retrieved from "https://imagecomics.fandom.com/wiki/Spawn_Vol_1_103?oldid=54135"
Community content is available under CC-BY-SA unless otherwise noted.