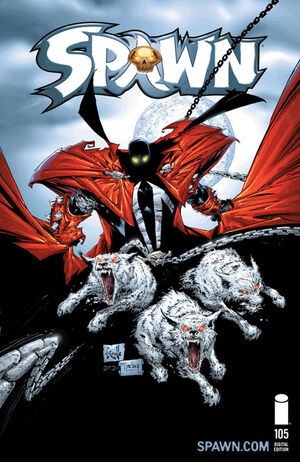 A plane crashes near New York City. Spawn watches and waits as it goes down. When the medics and news crews arrive to see what is going on, they are shocked to find someone had miraculously pulled the patrons safely from the plane.

Jason Wynn sends two thugs to retrieve a package for him. Overtkill comes barreling out. Wynn orders him to bring him Spawn's head.

A man calls a news production company to sell them footage of the man in a red cape pulling people from the plan wreckage. They work out a deal but the man is stabbed by Wynn's assistant before he can deliver the tape. Wynn ordered the story stay out of the newspapers.

Retrieved from "https://imagecomics.fandom.com/wiki/Spawn_Vol_1_105?oldid=54184"
Community content is available under CC-BY-SA unless otherwise noted.