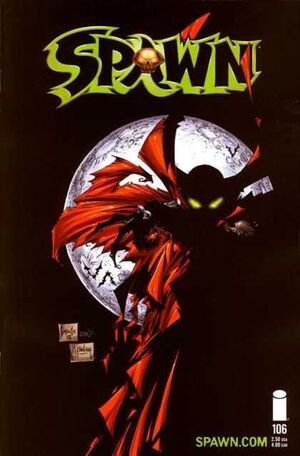 At the informant's house, Nikki Hanson arrives to pick up the incriminating tape. However, she finds her informant's dead body, dead, on the floor instead. Spawn arrives and asks her who else knew about the deal. She swore no one knew.

Spawn follows his hunch to the informant's assistant. Following up the chain of responsible people, he eventually finds Wynn was responsible for the hit.

Later, Spawn approaches Wynn. Wynn tells him he'll never leave him alone and will always haunt him. Spawn agrees and since he can't physically harm him due to the order to kill Terry if he dies,[1] he twists Wynn's mind to drive him insane.

Retrieved from "https://imagecomics.fandom.com/wiki/Spawn_Vol_1_106?oldid=54248"
Community content is available under CC-BY-SA unless otherwise noted.