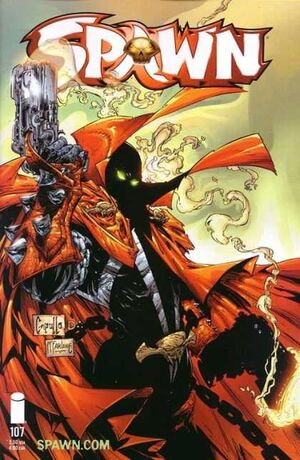 Appearing in "The Kingdom, Part 1"

Plot Synopsis for "The Kingdom, Part 1"

Two final mob members meet to exchange drugs for money. When one suddenly claims no trading on their turf, they ask pull their guns in a stand off. Spawn enters the building from the shadows and announces this is his turf. Both sides fire their guns at Spawn. However, Spawn absorbs the bullets and unleashed them back at the mobsters.

Elsewhere, a mysterious figure enters a bar and approaches Heaven's warrior Wolfram. He calls him by name and tells him the Kingdom has come. Wolfram tells him he won't play by their rules. Simon Pure tells him they won't tolerate rogues as he pulls out a sword to attack him.

Sam Burke and Twitch Williams arrive at the crime scene Spawn left them. They are confused how both sides have bullets and casings. They jest it must be carton bullets turning around mid air. Twitch suddenly recurrences an alarming phone call from Helen Williams. She is worried about their son and the two meet and embrace.

At a nearby mall, Max Williams IV plays video games. A young girl named Dawn distracts him and he loses his game. The two begin flirting and sharing personal stories. They talk about being misplaced and how they've ran away from home.

Retrieved from "https://imagecomics.fandom.com/wiki/Spawn_Vol_1_107?oldid=54378"
Community content is available under CC-BY-SA unless otherwise noted.