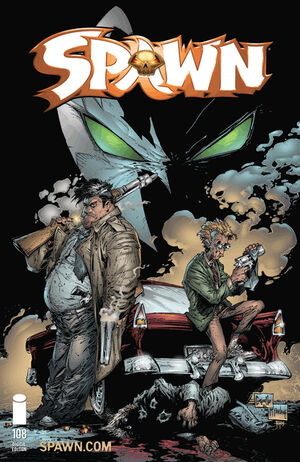 Appearing in "The Kingdom, Part 2"

Plot Synopsis for "The Kingdom, Part 2"

Sam Burke and Twitch Williams head to the rooftop of a New York City building. Sam pulls together a flashlight and a symbol to flash a Spawn symbol in the sky to see if it will summon Spawn. Sam nearly jumped out of his clothes when Spawn actually arrives to respond to their signal. Twitch musters the strength to ask their strange and grumpy ally for assistance in finding his son.

At a park, Eddie tells Max Williams IV that he's upset for him flaking out and running away from home. He was grilled by the police for information on Max's whereabouts and he's tired of covering for him. Max is distracted as he sees Dawn across the way and ignores Eddie. He becomes jealous when she kisses another boy on the cheek.

As Max walks away, Dawn suddenly gets in his way and asks for a date. Max replies passive aggressively she should ask the guy she just missed. She confidently blows it off like Lucas was a friend.

Elsewhere, Ab and Zab stand on a podium and sing the praises of Satan to the crowd. The crowd quickly disperses leaving money behind for them. They return to their home to find the door open and Spawn waiting for them.

Elsewhere, Albert Simmons travels on the rooftops of New York City when he's suddenly attacked by Simon Pure. Simon wounds him and tells him the children of the Kingdom are coming for him as he flashes his fangs at him. He warns Spawn to stay away from their affairs as he takes off after injuring him.

At a gathering of Kingdom members, Lucas steps forward. He admits he has signed and drinks blood in a ritual. His eyes begin flirting upon drinking the blood from a gold chalice.

At a bar, Sam and Twitch discuss whether they believe in God. Sam tells him he's always believed and was probably drilled into his head by nuns. Twitch tells him he was skeptical until recently. He can't understand how God would harm his sons, as he could never allow as such. They suddenly were interrupted to head outside and find several dead bodies string upside down across from the precinct.

Retrieved from "https://imagecomics.fandom.com/wiki/Spawn_Vol_1_108?oldid=54396"
Community content is available under CC-BY-SA unless otherwise noted.