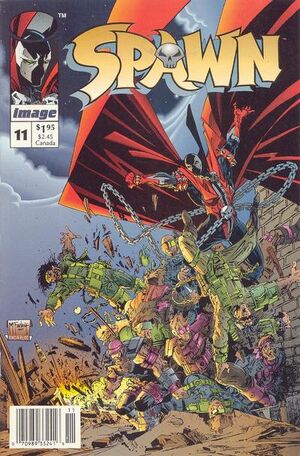 Spawn wakes up in the alley. His homeless friends Boots and Billy worry about him as he keeps moaning about some aardvark.[1] Spawn tells his homeless friends that he finds a need to protect them and his home, in the same way Boots protects the only thing he has.. his boots.

Soon a woman screams for help, as Spawn hears explosions nearby. He finds the woman but is unable to saver her in time as he takes a hit that blows through his body. Everyone is shocked when Spawn stands back up with a basketball sized hole through his chest.

The attacker, Boomer, runs off into the night and Spawn secretly chases him to find out where he came from. He finds the Nerds Gang headquarters where the Nerds discuss hating their rival gang the Creeps Gang.

Spawn finds he is outclassed and outmatched in guns and retreats. Spawn uses his military and strategic planning to goading each side into a final confrontation.

The plan works perfectly, leaving only the Nerd enforcer Byron still standing - until Spawn arrives. Unable to penetrate Byron's armor, Spawn teleports himself inside and rips his way out, reducing the villain to a bloody head.

Retrieved from "https://imagecomics.fandom.com/wiki/Spawn_Vol_1_11?oldid=43764"
Community content is available under CC-BY-SA unless otherwise noted.