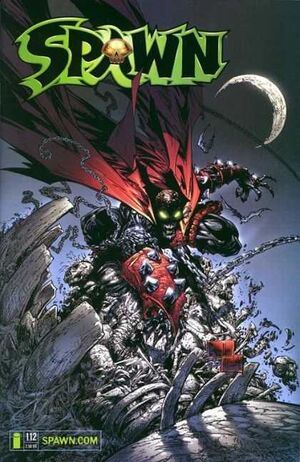 Appearing in "The Kingdom, Part 6"

Plot Synopsis for "The Kingdom, Part 6"

The Kingdom members descend to purify New York City members of sinners. They are shocked to land and discover everyone's "S" on their foreheads are now missing. The city had been purified and they cannot harm those worthy of God.

14 hours earlier, Sam Burke and Twitch Williams asked their police Chief to shut down Central Park. Twitch headed home to visit Helen Williams and kids for a moment before moving forward with his task.

Meanwhile at the Citadel of the Kingdom, Max Williams IV wakes up. Dawn tries to convince him to accept his new life when she's suddenly silenced by her neck being snapped. Ab and Zab arrive and tell Max they've come for him. They walk him to a portal in the middle of the building and tell him they are opening a path to hell.

At the park, Spawn is attacked by the legion of Kingdom members.

Retrieved from "https://imagecomics.fandom.com/wiki/Spawn_Vol_1_112?oldid=54699"
Community content is available under CC-BY-SA unless otherwise noted.