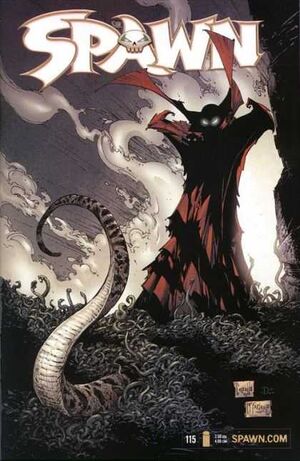 Appearing in "The Bridge, Part 2"

Plot Synopsis for "The Bridge, Part 2"

Ben Nakadai investigates the temple his organization wants ripped down. He makes an assessment even though local contractors say it is unstable. He finds a golden Cask and brings it back with him to the hotel.

At his hotel, he unlocks the box that is said to be an unsolvable maze and a glow emits from it.

Spawn arrives in Japan and swears to protect man against evil. Ghosts suddenly appeared across the city terrifying the locals. Spawn collected their should to be put to rest. Spawn spots the bridge from Ben Nakadai's dream. He crossed it to find Lord Nakadai standing guard. The two duel and when Spawn beards him he looks Spawn in the eye and learns pity from the dragon.

When Ben realizes he's unlocked the Cask, Mammon appears and takes it from him. He murders Ben and leaves him to endlessly wander the halls.

Retrieved from "https://imagecomics.fandom.com/wiki/Spawn_Vol_1_115?oldid=67537"
Community content is available under CC-BY-SA unless otherwise noted.