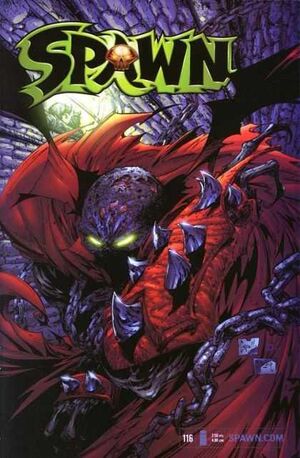 In New York City, Spawn approaches Cogliostro. He peers into his future and sees that Cog is dying. He tries to save him with his powers but is stopped by Cog. Cog reminds him he's killed the ruler of hell and has refused to take the throne. With a door open between earth and hell, he will suffer the consequences. Spawn responds that the power won't change him. Instead he will change the power. He tells cog he plans on allowing Hell to overcome Earth. Since he controls hell, he will then be able to remake earth how he wants it.

In Tennessee, Eddie Frank writes about his time in juvenile detention. He now believes Spawn is the source of all his issues. He travels to New York City and shoots innocent civilians at a bus stop. He is suddenly reborn as the Redeemer.

Retrieved from "https://imagecomics.fandom.com/wiki/Spawn_Vol_1_116?oldid=59730"
Community content is available under CC-BY-SA unless otherwise noted.