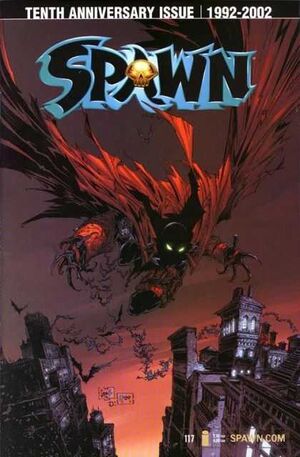 Appearing in "A Season In Hell, Part 1"

Plot Synopsis for "A Season In Hell, Part 1"

The doctors are baffled at Eddie Frank's recovery. His heart beat is only once a minute but he can still breath. Elsewhere, his soul has populated the Redeemer's body as he scours the city looking for Spawn.

Meanwhile in Tunisia, Spawn and Cogliostro wait for a sign from the Earth. Spawn tells him in order to change the world he must see a sign first. Suddenly, Cog spots the Redeemer coming for them in the distance. The Redeemer screams for vengeance for what Spawn had done to him.

Mammon arrives at the hospital and sets the Box of Eden next to Eddie's body. He tells him to accept the truth that his dad was abusive and walks away as his body flat lines.

During the battle, Redeemer is distracted by what is happening with Eddie's mortal body and takes off into the sky. Spawn lays wounded on the sands and is taken under by demon scorpions.

Arising out of young Eddie's search for revenge on the Hellspawn, the Redeemer finds Spawn in the desert and intends to finally settle the score. As the battle between the two is taking place, the mysterious stranger visits Eddie's bedside in the hospital and reveals the truth to an unconscious Eddie that has always been impossible for him to admit: His father was an abusive, drunken brute. While the truth could kill Eddie, it has the Redeemer examining his own motives. After receiving a final crushing blow from the Redeemer, Spawn lays on the desert floor while two patiently waiting scorpions do what they have been sent to do: drag the Hellspawn down into the bowels of Hell.

Retrieved from "https://imagecomics.fandom.com/wiki/Spawn_Vol_1_117?oldid=56188"
Community content is available under CC-BY-SA unless otherwise noted.