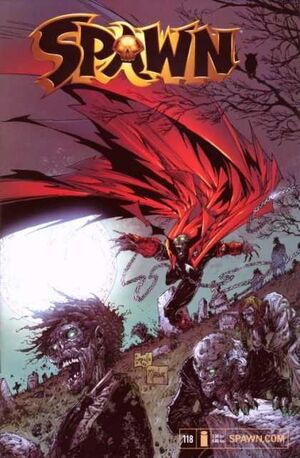 Appearing in "A Season In Hell, Part 2"

Plot Synopsis for "A Season In Hell, Part 2"

In a vision, Lain Covenant is about to marry Shiann when he suddenly transforms into a Hellspawn. Shiann screams in horror and calls for the guards. The people of Rhyll revolt and chase down Lord Covenant thinking he is a hideous beast.

In a vision in Asia, the mortal form of Albert Simmons is trapped in a cage. The K7-Leetha appears and offers him freedom if he agrees to a deal. Al wakes up next to Wanda Blake. She tells him to sleep outside it he continues to have the nightmares.

In another vision, Ulrich Ulfson is caught in a storm and good wife and unborn soon life dead next to him.

In reality of Tunisia, Mammon approaches Cogliostro and asks if he's ready to die and hands him the Box of Eden. Cog heads to a tree to hang himself.

In a vision, the mortal Al Simmons drives down the street and spots Terry Fitzgerald and Wanda Blake heading into a bar together. His vehicle crashes as he is distracted. He thinks what he wouldn't trade to see her again as he burns in the flames of his vehicle.

Harun-Al-Majnun rides outside Balakesh. He is unable to ride back in time to save his village.

In a vision, mortal Al Simmons witnessed his funeral with all of his friends attending. He sees Wanda and Terry are already in love.

In a vision, Simmons wakes up from his visions and sees someone asking if he'll make a deal.

He wakes up again and realizes he is in hell. Cog works furiously to free him as he is strapped down in chains and was being tortured with various visions.

Retrieved from "https://imagecomics.fandom.com/wiki/Spawn_Vol_1_118?oldid=59731"
Community content is available under CC-BY-SA unless otherwise noted.