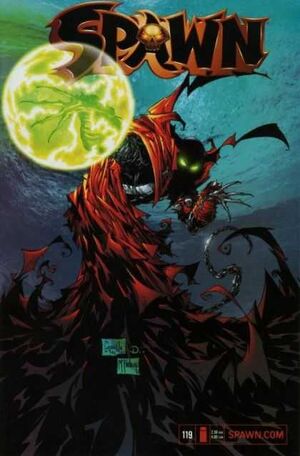 Appearing in "A Season In Hell, Part 3"

Plot Synopsis for "A Season In Hell, Part 3"

In Hell, the Violator toys with Cogliostro. He's surprised that he ever came to hell and that he had the Box of Eden with him. He asks where he got the box from.

However, he suddenly turns his attention to Spawn. He mercilessly beats him and demands he relinquish control of hell to him. He threatens Wanda Blake and tells him she already belongs to hell as the seeds have been implanted in her. Spawn becomes furious and fights back.

Elsewhere, The Freak examines the Box of Eden. He looks up to see Spawn embracing the strength and power of hell as he summons a Hellspawn army to his aid. He pulls energy from the grounds of hell as it is his domain.

Retrieved from "https://imagecomics.fandom.com/wiki/Spawn_Vol_1_119?oldid=67538"
Community content is available under CC-BY-SA unless otherwise noted.