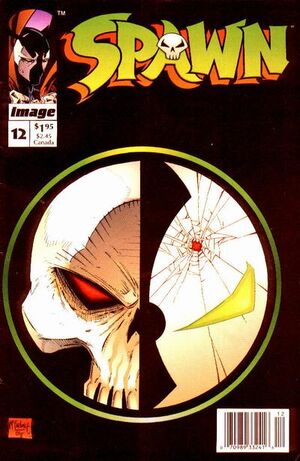 Thought I suppose you know all this, sitting up there watching down on us all day.

Spawn is drawn to the top of the Church again.[1] He ponders how the devil twists people's souls with his secret weapon, people's weakness to love. He recalls only being in a church once, which was to marry Wanda. He recalls Terry being there and how he was his best friend. How could Terry betray him and marry Wanda he wonders.

In Washington, D.C., CIA chief Jason Wynn is told by his henchmen that Terry is the number one suspect of compiling damaging information against his bosses and stolen goods. He orders his henchman to have several henchmen make the point clear that he knows about Terry's secret dealings. He then tells the henchmen to watch him to see where he goes once he's scarred.

In New York City, Spawn dresses in civilian clothes as he goes to visit Wanda's blind Granny Blake. He tells her there is an afterlife and he expects her to reach Heaven. He leaves without the heart to tell her that he made it to Hell.

At New York City Police Headquarters, Twitch and Sam discuss how they are now on probation for what happened with Kincaid.[2] Sam mentions it would be a good opportunity to follow up on the lead of the man in the red cape they spotted at Billy's. He's heard that he may have been involved in the bum incidents as well.

In Queens, New York, Wanda, Terry, and Cyan walk home to find several of Jason Wynn's henchman waiting there. One remarks to Terry that he has a nice family and it would be a shame if anything happened to them.

Elsewhere, the bums celebrate the safety Spawn has given them. The celebration takes an ugly turn when a bum tries on Spawn's mask, only to be nearly strangled by it. Spawn pulls it off and warns them he has no control over his suit and that the suit will attempt to protect itself.

Spawn suddenly experiences another flashback. He realizes that the American flag he keeps seeing in his visions represent his killer. The grim reaper he keeps seeing he realizes is the face paint of his killer. He keeps finding himself drawn to not just the church, but the chapel. He identifies his killer as Chapel.

Retrieved from "https://imagecomics.fandom.com/wiki/Spawn_Vol_1_12?oldid=68309"
Community content is available under CC-BY-SA unless otherwise noted.