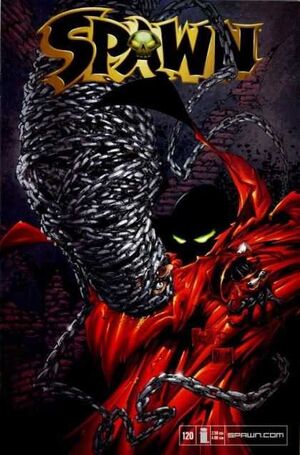 Let there be no mistake.. The king of hell is returned.

Appearing in "A Season in Hell, Part 4"

Plot Synopsis for "A Season in Hell, Part 4"

Years ago in Eden, Cogliostro recalls killing his brother, Abel. He struck a deal so that he wouldn't serve in heaven.

In hell, Spawn and Redeemer continue their battle against Demons and Violator. Redeemer senses the Box of Eden and retrieves it for Spawn. Spawn summons a gigantic structure and claims the king of hell has returned.

Cog yells out to Spawn to listen to him. He delivers the Box to Spawn and asks him to use the Box of Eden to grow a new paradise. Spawn opens it and rainbows fly out with green grass and animals appearing. He spots Wanda Blake and throws down the crown of hell to be with her.

Cog picks up the crown and tells him it was a betrayal all along to become the ruler of hell. Al Simmons is sent back to earth as a mortal with no prints or shadows.

Retrieved from "https://imagecomics.fandom.com/wiki/Spawn_Vol_1_120?oldid=61074"
Community content is available under CC-BY-SA unless otherwise noted.