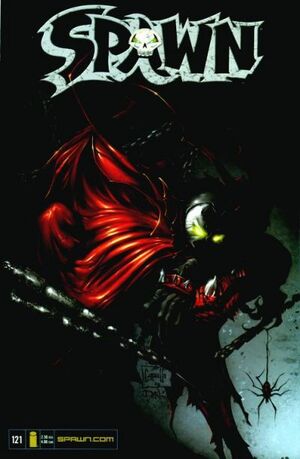 In New York City, a mortal Albert Simmons is stopped by the police. When they touch him, he responds with violence. He's quickly overpowered without his powers to aid him and placed in jail. His prints disappear and he gives no shadow during his arrest photos and prints.

Across from him is the Baltimore Razor, a serial killer. He talks about all his murders. Al is soon pulled out to meet his public defender, Jack Sheppard. Al has a hard time remembering his name or past as Jack asks him questions.

In his cell, the Baltimore Razor is approached by a Hellspawn shadow.

Elsewhere, Sam Burke and Twitch Williams sit in their Crimemobile in a stake out. They await Antonio Twistelli and choose each other as they grow impatient. They head back to the Police Headquarters. They hear a sudden noise from the cells and rush to check it out. They find the Baltimore Razor has had his skin removed.

Retrieved from "https://imagecomics.fandom.com/wiki/Spawn_Vol_1_121?oldid=59733"
Community content is available under CC-BY-SA unless otherwise noted.