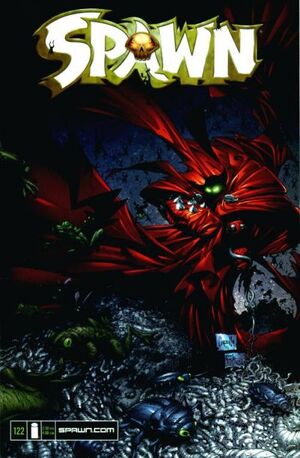 A woman writes in her diary about a man who walks the road to salvation with no shadow. She begins an occult tracking spell to locate him.

At the station, Twitch Williams overhears two officers talking about his a military man named, "Al" escaped and was asking about a, "Wanda". He perks up thinking they may be speaking about Spawn.

At a park, Albert Simmons enjoys the day when he spots Spawn's shadow lurking in the playground. He runs from it but stumbles into the Bowery Alleyways where he sees the ghosts of his him friends. He stumbled into Nyx who offers to help him.

Meanwhile, Terry asks his boss for information on what may have happened with All Simmons' grave being dug up. His boss tells him he doesn't have clearance but promises they are looking into it. Several armed guards head to the bottom the facility where they find the mentally deranged Jason Wynn.

Retrieved from "https://imagecomics.fandom.com/wiki/Spawn_Vol_1_122?oldid=56733"
Community content is available under CC-BY-SA unless otherwise noted.