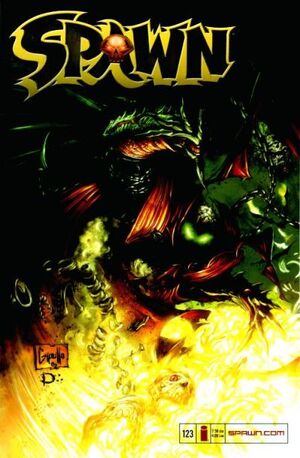 Wanda Blake cries to her husband Terry Fitzgerald about Al's grave being dug up. She wishes he had never been born when Cyan Fitzgerald walks into the room.

Elsewhere, Nyx feeds and clothes Albert Simmons. She tells him she could sense he was missing his shadow and new she wanted to help. In a moment of weakness, Nyx agrees to touch him physically and Al falls asleep.

Jason Wynn is sat in a board room and bombarded with questions as to why Al Simmons' body was dug up. After he has a vision of a Hell and Heaven Violator arguing over whether to tell the truth, Wynn tells them he needs to be fed, bathed, and comfortable before talking. He demands a lawyer and only then will he give them the information that had been removed from Al's files and now remains only in his head.

Al has a dream about his Shadow finding him and engulfing him in his suit once more. As he wakes up, Nyx has him strapped to the bed and he is kept from speaking. She holds a ceremonial knife up and prepares to 'help him'.

Retrieved from "https://imagecomics.fandom.com/wiki/Spawn_Vol_1_123?oldid=67548"
Community content is available under CC-BY-SA unless otherwise noted.