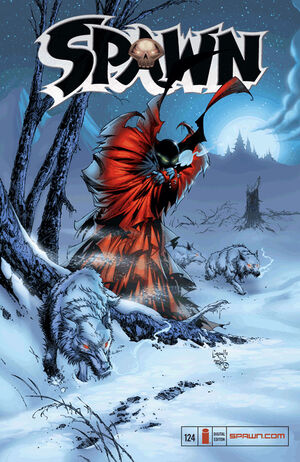 Nyx sits on Albert Simmons and lifts her knife up high as she plunges it into his chest. She begins stitching his heart together and assures him this will reunite him with his shadow. Meanwhile, K7-Leetha slithers out from the shadows and re-enters Al's body. He suddenly receives his memories back from his youth and time with Wanda Blake before dying. He recalls betraying Major Forsberg and Redeemer.

Nyx finishes stitching a pentagram in his heart and an earthquake hits New York City. Creatures of darkness pour in through the cracks and enter Al's body as a glowing M on his chest appears. He wakes up and is shocked to see him reunited as Spawn. He bursts out through the window.

Elsewhere, Jason Wynn and Violator negotiate their freedom with business men. They inform him that his security clearance will be restored.

Retrieved from "https://imagecomics.fandom.com/wiki/Spawn_Vol_1_124?oldid=56966"
Community content is available under CC-BY-SA unless otherwise noted.