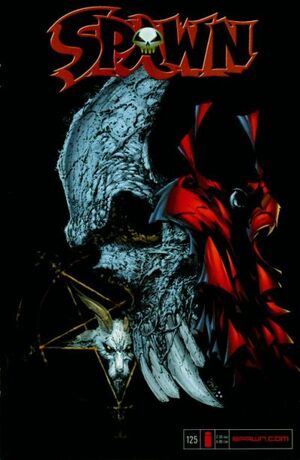 Appearing in "Wake Up Dreaming, Part 1"

Albert Simmons has a dream about being a hero. It is ruined by Violator showing and he wakes up. He realizes he's back in Nyx' apartment. She tells him she followed the wreckage trail and brought him back. Al feels the suit under his skin, it can protract at a moment's notice and he's sick with the idea of becoming Spawn once more.

They stroll through Central Park where Nyx asks about Wanda and how he mentions her name in his sleep. She offers help to find her for him. He tells her that Wanda has a family now and it wouldn't be right. Nyx tells him how in her practice that the roots that burrow in the dirt are just as important as the green leaves above ground. She tells him that evil exists and is necessary. She instructs him to relax and let the ebb and flow pass through him. She tells him they call it Greenworld, where vitality flows through and joy and pain are returned three fold to what you give.

Jason Wynn and Violator continue to receive praise from the underlings as they are freed from the prison. Wynn instructs his crew to pull all files on Simmons for him as he heads to his office and plots evil deeds with the Violator.

Spawn heads to make amends per his conversation with Nyx in the park. He finds Major Forsberg and frees him from the prison.

At New York City Police Headquarters, Twitch Williams looks into files and finds the arrest sheet for Al Simmons who was arrested for losing his shadow. He realizes it looks the same as the pictures from local grave robberies.

Retrieved from "https://imagecomics.fandom.com/wiki/Spawn_Vol_1_125?oldid=61075"
Community content is available under CC-BY-SA unless otherwise noted.