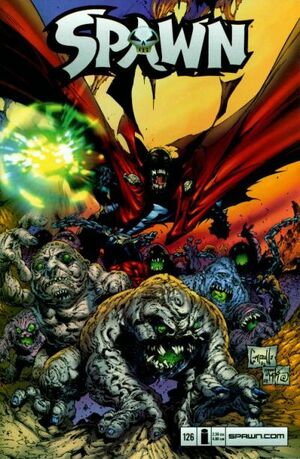 Appearing in "Wake Up Dreaming, Part 2"

Spawn finds Major Forsberg in the prison still and attempts to free him. He finds Demons have ambushed them and fights them off. He touches Forsberg's head and is transported into his mind.

In his mind, he helps free Forsberg but when they reach a stopping point, Forsberg tells him just to end it and shoot him in the head. He agrees and pulls the trigger.

In the present, Spawn sees Forsberg who finally closes his eyes for the final time. Forsberg thanks him in his dying breath for freeing him.

Retrieved from "https://imagecomics.fandom.com/wiki/Spawn_Vol_1_126?oldid=57331"
Community content is available under CC-BY-SA unless otherwise noted.