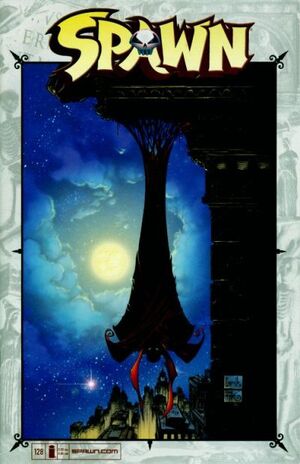 "At least I'm not a white guy again"

Appearing in "Wake Up Dreaming, Part 4"

Jason Wynn gives a presentation on Albert Simmons' past life in the military. He tells the group they need to spend money researching him as his grave was recently exhumed.

Elsewhere, Nyx trains Al on how to use his powers. Al slowly activates his powers body part by body part. He begins to receive information from a spider in the room. He realizes he can see almost the whole city with bugs sharing their vision with him. He sees sins committed all across the city. Nyx explains it's the Chthonic Impulse, the black underbelly of the Greenworld.

Elsewhere, Twitch Williams pleads for Sam Burke to assist him in tracking down Al Simmons. He wants revenge for what happened to Max.[1]

Meanwhile, Jason calls a escort service and requests a woman that will act and look like Wanda Blake. The Violator speaks in his head and convinces him to put on makeup that makes him look like the Clown. He arrives to pick up the escort and she's terrified to see what type of freak would dress up like him.

Al heads out to clear his head. He thinks about what other good deeds he can perform. Miraculously Twitch Williams drives by him in a car and spots him. He slams on the breaks and jumps out of the car and tackles him. He holds a gun to him and tells the innocent bystanders to keep walking as he's a cop.

Retrieved from "https://imagecomics.fandom.com/wiki/Spawn_Vol_1_128?oldid=59066"
Community content is available under CC-BY-SA unless otherwise noted.