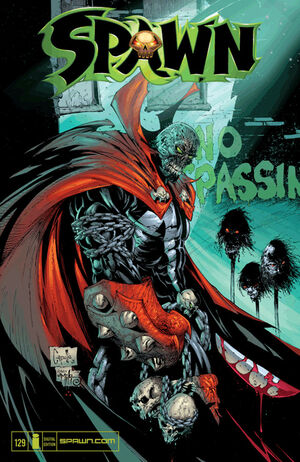 Appearing in "Wake Up Dreaming, Part 5"

Sam Burke arrives at a murder scene. The woman that met Jason Wynn the night before lies dead in an alley. The words, "Where's Wanda?" are written in blood on the wall above her body. Sam becomes slightly concerned that Twitch hasn't responded to his texts to come to the scene.

Elsewhere, Twitch Williams has Albert Simmons tied up in the abandoned building he attempted to commit suicide in earlier. He reminds Al he stopped him from killing himself. He rebukes him for taking Max Williams IV from him. He puts a bullet in the gun to play Russian Roulette with Al. The whole time he looses control of his sanity with each statement talking about everything he's lost in his life. Al eventually has enough and transforms into Spawn and breaks free of his binding. Twitch fires a shot but it doesn't slow Spawn down. Spawn tells Twitch that people move on once they experience loss. He saw it with Wanda, and he could one day see it with his son. When he threatens to drop him off a roof and Twitch chooses life, Twitch begins crying realizing what he's become. Spawn transforms back to his mortal form and offers him a chance to save his son. He suddenly collapses as he's bleeding from his wound as his mortal body retains the gunshot wound.

Meanwhile, Jason Wynn runs from the murder scene with blood on his hands. He attempts to clean his hands but is unable to wash his hands of the crime. His internal Violator psyche chides him for being a wimp about becoming queasy over a dead body.

Retrieved from "https://imagecomics.fandom.com/wiki/Spawn_Vol_1_129?oldid=59736"
Community content is available under CC-BY-SA unless otherwise noted.