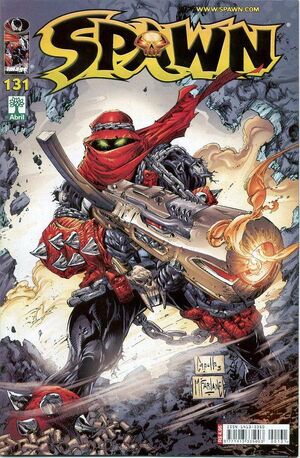 Appearing in "Seven And A Half Ghosts, Part 2"

Plot Synopsis for "Seven And A Half Ghosts, Part 2"

Sally pulls the trouble and shoots Twitch Williams in the chest. Max Williams IV rushes to his father's side as blood pours out onto the floor.

Suddenly, the Ghost Demon bursts out from the cellar and claims that the ghosts are his food and they are not allowed to leave. Spawn battles the monster and punches the man back into the cellar, which is actually a portal to Hell. The house implodes on itself along with the ghosts and demons except for Max and Twitch. He uses some of his Magic to heal the dying Twitch.

They return to New York City. Max and Twitch reunite with their family.

Retrieved from "https://imagecomics.fandom.com/wiki/Spawn_Vol_1_131?oldid=67659"
Community content is available under CC-BY-SA unless otherwise noted.