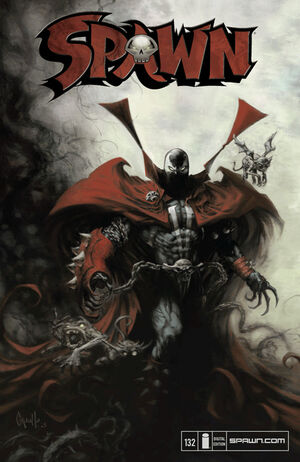 Inside Jason Wynn's head, Violator becomes more agitated that he is stuck inside his psyche. He wants to trash the place and move on.

In the present, Jason Wynn was distracted while being asked questions. He snaps out of it and resumes his psychic evaluation by a doctor. She asks if he has anything to share. While the clown chides him to tell about their murderous expeditions, Wynn simplistically replies he has nothing to share.

At the New York City Police Headquarters, Albert Simmons meets with Twitch Williams and Sam Burke. They discuss the strange events of Al coming back to life again as a mortal. They bring up the new case with the Wanda Killer. Al asks if his wife's been put on protective duty. Sam regrets to inform him that Wanda and Terry Fitzgerald have moved their family to California. In a rushed manner, Al takes off to investigate the killer.

He sits on top of the New York City skyline and uses the evil creatures to see the entire city by sharing their vision. He eventually finds Jason Wynn. He has painted Violator make-up on himself again and corners a woman who looks like Wanda. She pleads to be let go but he closes in on her with a drill and calls her Wanda. Spawn bursts onto the scene and quickly overpowers Wynn. He pulls back his mask to reveal he is Al Simmons and wants him to remember who brought him down. Wynn has an internal mental battle with the Violator. The clown breaks free from Wynn. Wynn throws himself from the building and Spawn is speechless watching him mentally battle himself. Spawn tells the woman to leave as he's done his duty believing Wynn is now dead.

Below, Wynn picks himself up and snaps his joints and bones back into place having survived the multi-story drop.

Spawn comes face to face with the "Where's Wanda" murderer, Jason Wynn. After confronting Jason, Spawn reveals that Jason will pay for his crimes and true justice will prevail. Jason pleads with Spawn, asking forgiveness and begging for his life. As things begin to look grim for Jason Wynn, the Clown exposes what his real reasons where for "helping" Wynn all this time. As Spawn watches, Wynn falls to his apparent death, and Spawn believes that this problem has been resolved. What Spawn doesn't know, is that his problems have just begun.

Retrieved from "https://imagecomics.fandom.com/wiki/Spawn_Vol_1_132?oldid=67660"
Community content is available under CC-BY-SA unless otherwise noted.