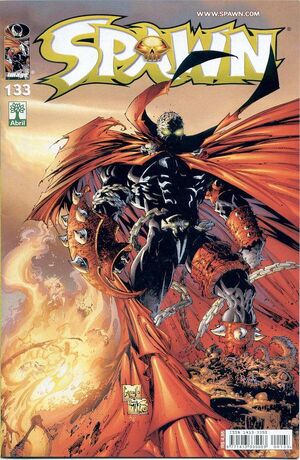 Appearing in "The Gentleman Caller"

Plot Synopsis for "The Gentleman Caller"

In New York City, Spawn stands on top of the city skyline. He believes something evil lurks out in the city but is unable to detect its source. Nyx walks out and tells him he needs rest. She asks him to come inside to focus so that his human side will stay in control instead of the Spawn-side. He agrees and enters the building to sleep.

Elsewhere, the Violator inhabits Jason Wynn's body and mind. He approaches several drug dealers in an alley and murders all except one. The man is in a panic and calls himself "Rex" even though it is not his true name. Violator is impatient and grabs the man by the skull anyways and uses his power to convert him into a loyal lackey sporting the same makeup as he does in his Clown form.

Nyx wakes up in bed next to Al. She scurries to the next room and grows more concerned for Al as she also feels the evil in the air as well. She creates a circle of candles and casts her magic to see if she can locate its origin. Mammon suddenly appears to Nyx in her dream. He tells her intimate information about her life. He knew that she grew up as Carrie Anne on Long Island, New York. She lost her mother when she was two years old and had no other siblings to grow up with. He knew she began experimenting with magic at the age of eight and achieved success in ways she could not understand. He gets to his point that she later started a covenant with her friends Lily and Thea. Lily left due to discovering boys, but Thea spiraled down out of control with her understanding of magic. He now had Thea's soul and was willing to bargain for it when she was ready. He left her dream and told her he'd reappear when she was ready to discuss what he needed with him.

Retrieved from "https://imagecomics.fandom.com/wiki/Spawn_Vol_1_133?oldid=61669"
Community content is available under CC-BY-SA unless otherwise noted.