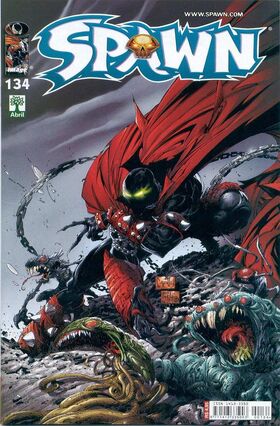 I knew you would come to your senses.

Appearing in "A Thousand Clowns, Part 1"

Years ago, Thea, Nyx, and Lily experimented with magic for the first time. They used an ouiji board in an attempt to summon spirits directly.

In the present, Nyx reviews old pictures of Thea, Lily, and herself. She tells Albert Simmons they were inseparable and Thea died running from what she thought was death.[1] She asks Al what Hell is like. He replies that he can't tell her, but he can show her. He unleashes his Spawn powers and touches her head to give her the experience of hell. He body contorts and writhes in pain. Upon snapping out of her vision, she trembles and can barely believe how bad hell really is.

Rex steps on a bus with his Clown makeup and hijacks the bus and patrons.

Spawn senses the evil growing in the night. He tracks down the source to the Violator who has surrounded himself now with many patrons who have been converted into a clown army sporting his make-up. They two begin a battle.

Elsewhere, Nyx heads to a park where she sits on a bench thinking about the pain of hell and her friend. Mammon appears and confidently tells her he knew she would come eventually. Nyx hangs her head in shame and begrudgingly asks what he wants.