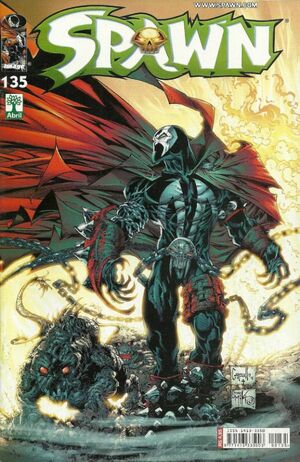 Appearing in "A Thousand Clowns, Part 2"

The Violator has Spawn tied up with a throned crown on his head in the Dead Zone. Spawn lays battered and unable to recover due to the Dead Zone's neutralizing affects on his powers. One of the Clown's followers gets too close and Spawn grabs him and threatens to kill him if he is not released. Violator laughs and cuts the man's head off. He orders his followers to grab the man and throw him on the dinner table for food. He has all of his followers throw food at Spawn and ridicule him. Without his powers he grows weak from the abuse.

Mammon enters Al's psyche. Al enters his home that he grew up in with his parents. He spots Mammon looking through Al's photo albums and tells Al that anyone who went through what he had to as a child would turn anyone into a monster.

Elsewhere, Nyx tracks down Lillian Redgrave to her new job at a rescue mission in New Jersey. They talk about the loss of Thea. Nyx asks for Lily's help in freeing Thea and Lily refuses. Lily tells her that she's become a much different person and refuses to look back on that part of her life. She tells Nyx that if Thea got herself into the mess, she deserves to be stuck in hell and ushers Nyx out of her office.

The Phlebiac Bros. Pandemonium Circus" has a brand new addition, "Hellspawn Patheticus." Contained by the Dead Zone, Spawn is put on display and is taught a lesson on just how truly evil and twisted The Clown is. Still troubled by the offer Mammon gave her, Nyx turns to her old friend Lily with hopes that she will help Nyx save Thea's soul. Lily makes it clear that she wants nothing to do with it, stating that the best help she can provide would be to pray for both Nyx and Thea. With his own psyche being invaded by Mammon, Spawn summons the strength to attempt one final escape.

Dedicated to the loving memory of Carrie Nodell

Retrieved from "https://imagecomics.fandom.com/wiki/Spawn_Vol_1_135?oldid=67661"
Community content is available under CC-BY-SA unless otherwise noted.