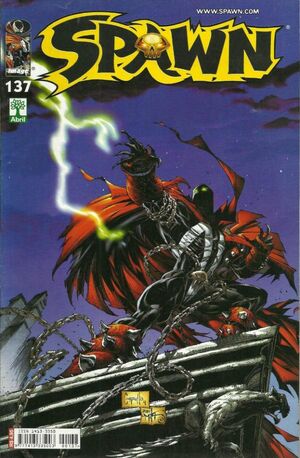 Appearing in "A Thousand Clowns, Part 4"

Violator's Clown Mob attacks the city. Engaging in crimes, murders, and vandalism, the city is in a standstill with the blackout occurring at the same time. Spawn attempts to save innocents from the carnage but is unable to stop the shear number of people being converted to the clown army.

Mammon approaches Nyx and asks her if she's ready to commit to their deal. He wants Spawn and in exchange he'll give her Thea's soul.

Sam Burke and Twitch Williams are driving their Crimemobile through the city when suddenly a man falls on the hood. They get out and prepare to take the man to the hospital when they're cornered by several hoodlums. They mistake them as corrupt police who harmed their friend.

Retrieved from "https://imagecomics.fandom.com/wiki/Spawn_Vol_1_137?oldid=67662"
Community content is available under CC-BY-SA unless otherwise noted.