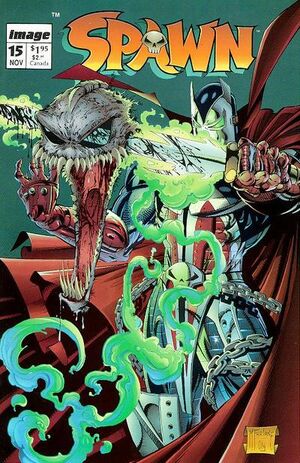 Your God is my enemy.

The Clown's story continues. Medieval Spawn survives the Violator's blast, but he is horribly disfigured. Even in this state, however, he is able to best Violator with the help of his living suit's imprisoning tendrils. The Violator's severed head is hoisted aloft as a grisly trophy of their demonic battle. Ironically, the woman he sought to protect from the Violator is sickened by Spawn's true form and flees in flight.

The Spawn lays in an alley peacefully resting. When the owner comes out mad that bums in his alley are begging and foraging for scraps, the owner physically pushes Spawn around. Spawn is feed up with people trying to tell him what to do. He beats the man down and barks that this is now spawn territory. The man cowers away.

In Queens, New York, Terry Fitzgerald lays awake, terrified as the mob's men have threatened his family again and he doesn't know what to do.

Retrieved from "https://imagecomics.fandom.com/wiki/Spawn_Vol_1_15?oldid=61151"
Community content is available under CC-BY-SA unless otherwise noted.