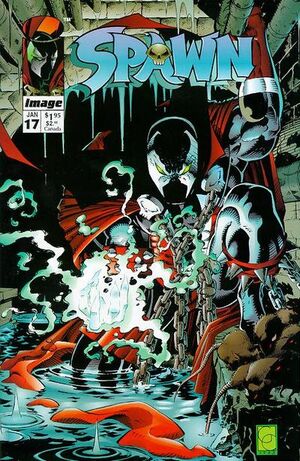 You can't hide. I can track you through time and space, ends of the earth! There's nowhere to run from death!

Malebolgia explains this history of Psychoplasm and how Simmonsville was created to Spawn.

Terry Fitzgerald and Wanda Blake watch news reports about Jason Wynn mysterious disappearance over several days, and allegations against him that he was involved in Simmons' murder.

Orbital Angel Station completes the transformation of their Redeemer. Anti-Spawn appears in New York City and challenges Spawn to a fight. Anti-Spawn knocks him through a church window. Upon landing, Spawn is surrounded by demons look at his unconscious body. They consider taking his suit and becoming warriors themselves but are knocked back by Anti-Spawn.

Spawn reawakens and attempts to teleport away but is quickly tracked by the Anti-Spawn. The Anti-Spawn claims to have the powers of heaven which confuses Spawn as he still doesn't totally understand his place in the world. Anti-Spawn knocks him down and moves in for the killing blow.

Retrieved from "https://imagecomics.fandom.com/wiki/Spawn_Vol_1_17?oldid=67493"
Community content is available under CC-BY-SA unless otherwise noted.