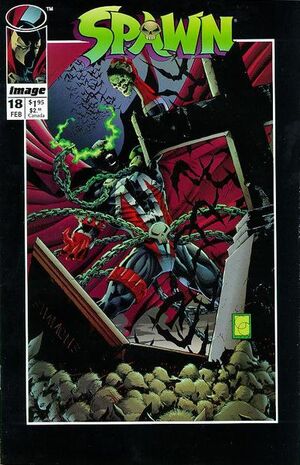 As Anti-Spawn is about to land the finishing blow on Spawn in the Bowery Alleyways, the regular street bum, Marty Sladek, steps in as a rule of sticking up for his friends. It was something he learned from his military training. Marty strikes the Anti-Spawn on the back of the head but performs no damage other than slightly distracting Anti-Spawn.

When the Anti-Spawn turns to threaten the bums, Spawn receives a second burst of energy to protect his friends/family. Fighting him until Anti-Spawn falls to his knees, The Spawn blasts his skull with pure Necroplasm, sending the creature back to heaven.

At Orbital Angel Station, the Anti-Spawn reappears. The workers there agree the test was good, but they need to empower him with more Elemental Fire to battle the Hellspawn.

A strange man gives Spawn a blank card. Spawn recognizes him from earlier.[1] The man tells him there are ways to break the deal with the devil and keep his powers.

Spawn heads to Simmonsville to burn it to the ground. When Major Vale attempt to interrupt. Spawn murders him in retribution for earlier crimes. Spawn saves one memory from the Simmonsville Psychoplasm, the day he asked Wanda Blake to marry him.

Spawn heads to Queens, New York. He watches from the rain outside as Wanda heads to bed. Wanda has a fleeting moment of happiness as she stares into the darkness where the unseen spawn hides, but it fades when Terry Fitzgerald calls her to bed.

Retrieved from "https://imagecomics.fandom.com/wiki/Spawn_Vol_1_18?oldid=61154"
Community content is available under CC-BY-SA unless otherwise noted.