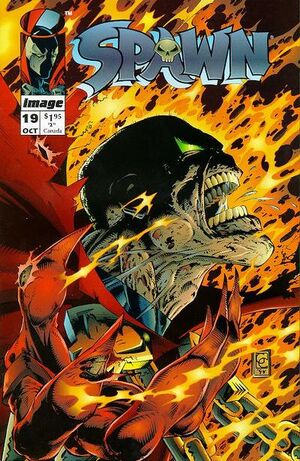 Magic is like telling a lie so convincing that even the universe believes you!

In a memory from Al's past, a second Atomic Bomb was ignited, this time in Nagasaki. It created a portal allowing demons through to the Earth realm.

Elsewhere in Society Union, Al Simmons was lining up an assassination shot from a roof. He was chased away before taking the shot. He ran into an alley where a man held a gun to his head and he heard the safety click.

Suddenly Al wakes up as the click of bottles wakes him up in a Bowery Alleyway. A sudden explosion from the bottles goes off catching Spawn at point-blank range. Spawn chases the assailant but is stopped by a well dressed man. The man tells Spawn to ignore the assailant as he has his wallet. He claims they have more important matters at hand.

At the airport, Andrei Zlenko unloads luggage. Along with several Ukranian higher ups, he disembarks from the plane with lethal cargo. That evening, they plan to discuss nuclear disarmament.

Meanwhile, Porsche MacNeill drives through the Ukranian village of New York City. He's talked about behind his back for being rich, but brilliant with electronics.

Yousef Volokhev sneaks out from the conference for an evening of booze and women. His detonation device for the bomb was destroyed in transit and he needs a new way to secretly ignite his Atomic Bomb at the peace summit.

He's watched from the Overlap by demons. They continue their discussion of experimenting on Hellspawn vulnerabilities. #^9 mentions bombs nor heat can harm hellspawn. He claims to have reprogrammed a human, Yousef, to set of an atom bomb to see if atomic particles will harm hellspawn.

Harry Houdini discusses magic with Spawn. He explains how it is the ability for a person to use his will and extra dimensional energies to alter reality. He also explains how his K7 suit has a mind of it's own and will attack and protect automatically to protect Spawn. He explains his suit can also manifest objects if he thinks about it with a clear head and strong will. It will transmute molecules around him into what he needs.

Porsche let's of another bomb in an alley and Spawn decide to stop the kid.

In Queens, New York, Terry Fitzgerald receives a call about an atomic device threat and hurries in to work.

Retrieved from "https://imagecomics.fandom.com/wiki/Spawn_Vol_1_19?oldid=61155"
Community content is available under CC-BY-SA unless otherwise noted.