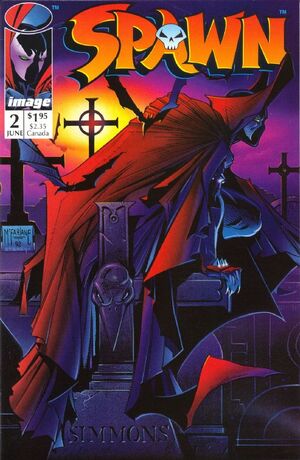 And stop using that G-word. Hurts my ears.

A clown stands in an alley discussing all the gruesome ways he can kill someone to a regular alley cat. The clown claims to be the Violator to the cat and that he would be going after Spawn later that night.

Spawn is drawn to the top of a church cross for the second time. He begins wondering how he'll find his wife and how she'll accept him now that he's been disfigured. He curses at the devil for betraying him in his deal to come back and knows that he's messing with him. He knows he's controlling when he gets these visions and thinks it's a sick twisted game to him. His thoughts are interrupted when he spots a strange clown waving at him from the shadows of a nearby rooftop. The clown disappears into the shadows.

Later that night at the Dawncorp Building, mobsters are attacked and have their hearts ripped from their chest. The Violator stands over a bloody mess.

On top of the church, Spawn attempts to use his magic to transform his skin back to the way it was before he died. He's shocked to find out that he turns himself into a white man when he knows he should be African American.

Sam Burke and Twitch Williams discuss the paperwork piling up on their desk. They now have six cases from the heart surgeon and no leads.

The violator takes out a mob boss named Gino. He shudders when Gino mutters the name, "Jesus" over and over again and rips out his heart.

Spawn receives a flashback of Jason Wynn, who had taught him to fight. He recalls getting into more fights and disagreeing with Wynn's ideals. He found that Wynn was slowly becoming evil. Spawn becomes faint from the shock and exhaustion. He falls into a nearby alley.

Upon waking up, he finds the clown and recognizes him from the rooftop. The clown tells him the he is the Spawn and a hellspawn sent back to earth. Shaking it off, Spawn dismisses the clown and walks away. Upon turning his back, the clown reveals his true form of being the Violator and asks him to not turn away and to, "have a heart!"

Retrieved from "https://imagecomics.fandom.com/wiki/Spawn_Vol_1_2?oldid=67910"
Community content is available under CC-BY-SA unless otherwise noted.