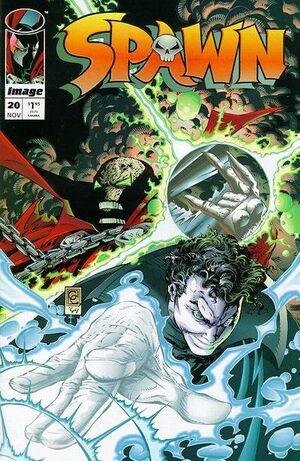 Defy gravity? Nonsense! I've simply convinced the gravity that the car is lighter than air.

Harry Houdini drops spawn off to follow Porsche MacNeill. While waiting, he recalls taking immersion classes in California where he met Terry Fitzgerald for the first time.

He suddenly hears Terry's voice below and snaps back to reality. Spawn spots him following up on his call where he's suddenly attacked by thugs. Spawn jumps down to subdue his assailants when he reads a note with Terry's orders to find Yousef Volokhev.

Miraculously, Spawn spots Yousef ditching the weapons conference to head up to Andrei Zlenko's apartment across the street.

Hanging outside the window of the building where they are meeting, Spawn overhears Yousef speaking with Zlenko about damaged nuclear equipment. They agree to approach Porsche who has become an electronic expert and could potentially supply them with a new trigger device.

Houdini shoes up and Spawn tells him something fishy is going on at the nuclear conference.

Later at the conference, a small disturbance breaks out. When Yousef sets off the bomb countdown to quell the fight, he learns he cannot turn it off. Houdini transports the bomb at the last moment and it ignites in the Overlap instead of New York City.

Yousef and Porsche are arrested for their attempted genocide.

With Houdini now missing, Spawn tracks down Houdini's Flying Car by using magic. He is happy to have learned some magic from Houdini before he left, but the car suddenly disappears as it was yet another task for Spawn to learn more about his powers.

Retrieved from "https://imagecomics.fandom.com/wiki/Spawn_Vol_1_20?oldid=61156"
Community content is available under CC-BY-SA unless otherwise noted.