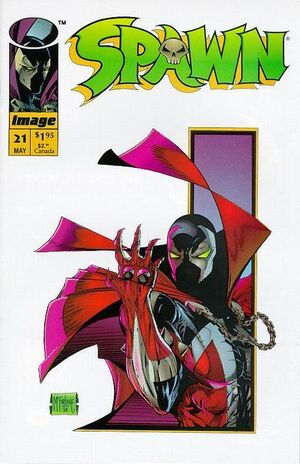 You see, Smithers, I have a certain reputation. One which I'm rather proud of...

Appearing in "The Hunt, Part 1"

Plot Synopsis for "The Hunt, Part 1"

In the Bowery Alleyways, Bobby the bum fixes Spawn's face with a shoelace due to his previous injuries.[1] He tells Spawn how he lost his wife to brain cancer. He never got his life back together after that and he lost everything. Spawn agrees with his pep talk, and says he will put the pieces of his life back together.

Meanwhile at Central Intelligence Agency Headquarters, Jason Wynn receives a report exonerating Terry Fitzgerald from any wrong doings. Wynn orders his men to destroy the report and continue monitoring him anyways. Wynn continues to have a lot on his mind since he had gone missing for several days and is under close scrutiny.[2]

Sam Burke and Twitch Williams corner bum Jimmy Lindon. They demand to know where the man in the red caped is and give him 48 hours to get them answers or else.

Elsewhere, Stewart, one of Twistelli's men, threatens a bum. Spawn appears and tells him to relay a message to his boss as he physically harms and threatens the mobster to say away.

Lter, Twistelli is furious with Spawn for breaking into his office and hurting his men. He receives word that Terry Fitzgerald could be involved. He sets his men out to investigate. He then demands an update on OvertKill's status.

Retrieved from "https://imagecomics.fandom.com/wiki/Spawn_Vol_1_21?oldid=68320"
Community content is available under CC-BY-SA unless otherwise noted.