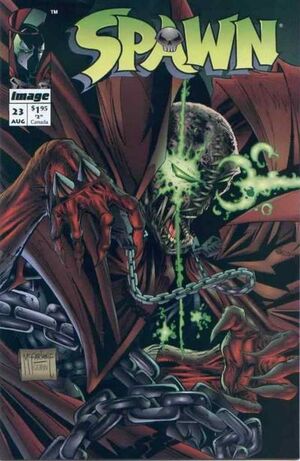 Appearing in "The Hunt, Part 3"

Plot Synopsis for "The Hunt, Part 3"

Spawn frantically searches for his missiles he stole from the CIA weapons cache.[1] When Twitch Williams and Sam Burke pull a gun and order him to freeze, Spawn barely slows down to listen. Twitch takes a shot at Spawn, shooting him through the kneecap with his incredible marksman skills. Spawn unbelievingly keeps running unphased.

OvertKill closes in on Terry Fitzgerald, and lifts him high in the air to murder him. His programming is still on the fritz and he believes Terry is Spawn. Spawn arrives and saves Terry at the last minute.

In the suburbs, Granny Blake and Wanda Blake sit on a porch. When Wanda suddenly receives a call that two CIA operatives lay dead on the ground in their yard, and Terry is no where to be found, and thus a suspect, she flees home to see what is going on.

In the Central Intelligence Agency Headquarters, Jason Wynn receives word that two of his men have been shot. They know that they were killed by mob henchman, but Wynn pushes forward with blaming Terry. He has been under fire for having gone missing and having several security breaches with weapons being stolen, he needs to blame this on someone and Terry has become his scapegoat.

Antonio Twistelli scolds his men who shot the CIA operatives. He reminds them their orders were to have Fitzgerald meet with OvertKill and nothing more.

Elsewhere, Spawn continues his battle with OvertKill but finds no way to pierce his armor. When Sam and Twitch arrive, they realize Spawn was telling the truth about needing to save someone when he left. Twitch gets an idea, and lets a bullet fly through the ear of OvertKill. This scrambles his programming as he talks about the Youngbloods and Badrock and walks away from the scene. Sam and Twitch walk up over the unconscious bodies of Terry and Spawn who were both knocked out from the fight.

Wanda rushes to her home in Queens, New York to find several news stations have arrived at her house. She breaks down in tears. Her neighbors all turn away from helping as all were paid by the mob to ignore her.

Retrieved from "https://imagecomics.fandom.com/wiki/Spawn_Vol_1_23?oldid=68325"
Community content is available under CC-BY-SA unless otherwise noted.