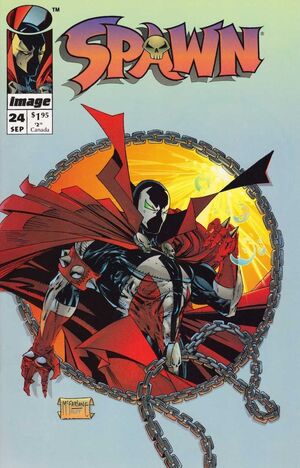 I've always been amazed how relaxed you are about destroying people.

Appearing in "The Hunt, Part 4"

Plot Synopsis for "The Hunt, Part 4"

Sam Burke and Twitch Williams are figuring out what to do in the aftermath of the OvertKill fiasco. Terry Fitzgerald struggles to his feet and tells them he has to get home to his wife as he believes the Mafia have them.

Tony Twist orders his men to clean up the mess of the CIA men killed on Terry's lawn.[1] When he receives a call from his boss, Gino, he grits his teeth. Twist tells his men to head over to Gino's favorite chef and cut off his hands. He's not happy with how the other mobsters are reacting to his failures with OvertKill and wants to send them a message of who's really in charge.

Terry continues his desperate sprint home for his wife. Twitch pulls a gun on him and tells him to freeze. When they are distracted by several bums, a Mafia car comes flying down the alley towards them. Spawn jumps in front and absorbs the hit of the car. He uses his magic to increase his density and remain like a stone, while the car crumples up open hitting him. We writes on the walls that these alleys belong to him. He's sick of hiding and is making is presence known.

At Central Intelligence Agency Headquarters, Spawn appears and blackmails Jason Wynn to drop the case on Terry. He hands him files incriminating him and disappears.

At Sam Burke's home, Spawn appears and gives him dirt on Chief Banks. He says this will keep him from talking and tells him to drop everything they have on Terry.

In a sauna house, Spawn appears as Tony Twist relaxes. He gives him a file and threatens him to drop all investigations on Terry or else.

In Queens, New York, Terry and Wanda cuddle and discuss how suddenly everyone is leaving him alone. Terry feels like he must have someone watching out for him.

The homeless prevent Sam and Twitch from arresting Terry and Spawn. Wanda and Cyan had not actually been kidnapped, but Terry is still wanted by the Mob, CIA and police. Spawn threatens each of Terry's antagonists with the release of ruinous documents if they continue to pursue him. Thanks to Spawn's bluff, Terry is cleared.

Retrieved from "https://imagecomics.fandom.com/wiki/Spawn_Vol_1_24?oldid=68138"
Community content is available under CC-BY-SA unless otherwise noted.