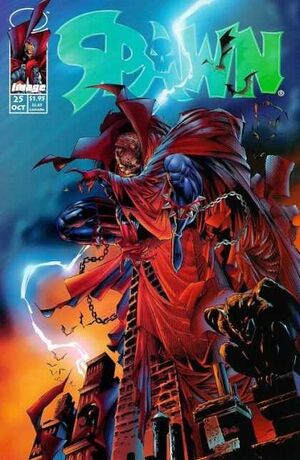 Admit it, Terry, things are wrong. Everyone's acting like nothing happened. No murders. No manhunt. No cops. Nothing.

In the Alleyways, David Brewie threatens a street bum. He tells him that Spawn needs to get out of their territory or there will be blood. Brewie runs back to tell his boss, Tremor, that he did as he was told. Tremor is excited as he wants revenge on Antonio Twistelli.

In Queens, New York, Wanda Blake tells Terry Fitzgerald she's sick of not knowing what's happening with the men in her life. She decides to shadow him at work so she can understand the risks he puts himself in.

Meanwhile, in the alleys a homeless man runs to Spawn to ask for assistance.

A the Police Station, Twitch Williams watches Sam Burke sing and skip through his day. He asks why he's so happy when they've lost all their evidence on their main suspect, Spawn. Sam explains he was recently given a file with dirt on their boss, Chief Banks.[1]

Outside of Tremor's lair, a red cape and spawn shape watch from the window ledge. Upon spotting him, Tremor leaps to attack but is surprised when he finds the figure is a wooden cutout of Spawn. Spawn asks what he wanted, and Tremor continues to lash out that he doesn't care what happens to the bums or his people. He demands to know everything Spawn knows about Twistelli. Tremor figures since Twistelli is after him, he must know something as Twistelli doesn't typically get involved at that level.

Tremor reveals he wants revenge on Twistelli. He's responsible for putting Tremor through chemical and bio-engineering experiments to transform him into the monster that he is today. Spawn gives him secret files on Twistelli which placates him as he runs off. Spawn ponders whether Tremor will return as a friend or foe for their next meeting.

This issue is dedicated to the Sprit of Independance

Retrieved from "https://imagecomics.fandom.com/wiki/Spawn_Vol_1_25?oldid=68327"
Community content is available under CC-BY-SA unless otherwise noted.