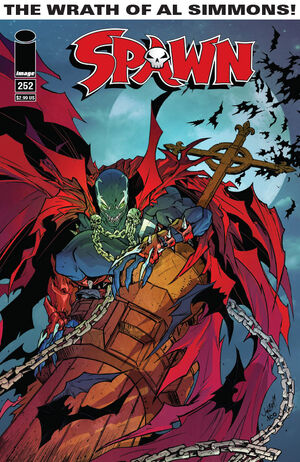 This is how you two communicate? Via email?

Spawn is about to be hung from a tree. He looks out to see an audience watching.

Al wakes up from his dream, screaming.

In Hell, Wanda Blake holds her unborn child in her arms. A knocking at the door claims to be a friend of her husband, Al Simmons. She questions the voice if it knows her name. He lashes out in anger that it will kill her as it continues pounding at the door. It screams they will get revenge for what Spawn did to the Unholy Trinity.

At a coffee shop, Mike tells Al the Wolves are coming for Wanda. Mike jumps on the internet to download an email from God. Al make a snide comment that they communicate in a simple way like email. Mike skims through an email referencing the Unholy Trinity. Suddenly Mike rushes them out of the coffee shop and asks for Al's trust. He then feels he must apologize for what will happen next.

At the Central Intelligence Agency Headquarters, a soldier remarks his facial recognition software is firing. It believe Al is responsible for Wanda's death.

He's mentally projected back in to his past. He's approached by Hossein Mohammedizadeu, an Al Queda member he assassinated while in the CIA. Spawn is suddenly kidnapped the same way Hossein was by Al previously. Hossein removed the bag from over his head and informs him he was innocent. The person who set off the bomb killing 25 people was really a CIA informant. He continues to be shown other people he killed that had truly been innocent.

Snapping back to the present, Al remembers the fortune teller as the grandmother of a cartel member he wanted. She remind him how she was tortured by his squadmate for information he knew she didn't have. She then shows Spawn all the souls he's unjustly murdered. They tell Spawn they are connected to him. Bound to him. Spawn realizes his suit is made up of all the souls of innocent people he's murdered. The fortune teller tells Spawn she blew her brains out when her son went missing and she had nothing left to live for.

Spawn awakens in New York City. Mike helps him up and tells him he had to know his suit was made up of innocent souls.

At CIA HQ, Cutter is given a file on Al and his reappearance. He remarks he hasn't seen that name in 10 years.

Retrieved from "https://imagecomics.fandom.com/wiki/Spawn_Vol_1_252?oldid=67668"
Community content is available under CC-BY-SA unless otherwise noted.