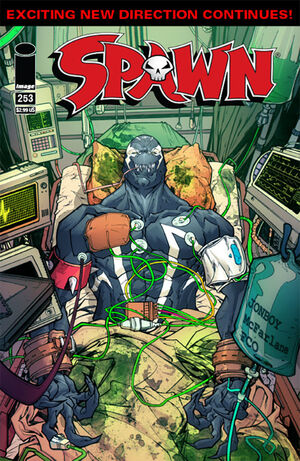 At Staten Island University Hospital, Bernard Simmons passes away from terminal cancer. Spawn appears and frightens Bernard. Spawn calls him dad and Bernard replies that Al died years ago. Al explains that Demons want to use him as leverage to get back at him. He tells Bernard to follow him to get to the Judgment Point.

Along their journey, Bernard and Al squabble about their poor relationship. Bernard apologizes and Al tells him its too late and they no longer cares what happens to him. Bernard calls him out saying that since he's there helping him, he clearly cares on some level.

They're suddenly attacked by various Demons. Eventually, Belial appears before them and buries Spawn beneath a fallen building. He grabs Bernard and tells him that he has grand plans for him in the future. Spawn emerges from the rubble and pulls out his Sword of the Spirit. Belial curses God for getting involved and that Spawn shouldn't have the sword as he runs away.

Spawn delivers him to the Judgment Point where his father steps in the light. He tells hid dad goodbye.

Work in progress by Jonboy Meyers and Laura Martin.
Add a photo to this gallery

Retrieved from "https://imagecomics.fandom.com/wiki/Spawn_Vol_1_253?oldid=49595"
Community content is available under CC-BY-SA unless otherwise noted.