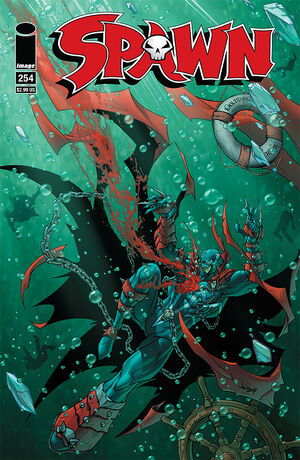 Through your grace, you shall be saved, for I AM YOUR SAVIOR!

In 1912 the R.M.S. Titanic began to sink. A man attempted to save his son but was denied the usage of a boat. Instead, they leaped off the boat as it sank into the water. They were approached by an Angel and believed they had been saved.

In New York City, Albert Simmons is approached by a mysterious demon. She tells him he should join the side of Lucifer as he will tell the truth. God always misleads him and won't save Wanda Blake. Al challenges her back and tells her that they are both obsessed with humans. He tells her to leave him alone to prove they truly aren't.

She tells Al that humans are tied to time. They obsess over birthdays, arriving on time for work, sleeping at certain times. She tells him she can make changes if he wants and snaps her fingers.

They are suddenly transported back a titanic timeline. Spawn sees the angel Gabriel and watches the same story play out with the old man and child attempt to escape the sinking ship. Gabriel tells them he needs to save them but Spawn tackles the angel and lets the man and boy die. He tells them he's learned that you can't change time. It would alter too many things and potentially impact Wanda being born or his ability to save her, so they need to pass.

The mysterious demon snaps her fingers and they are teleported back to the present once more. She tells him she's impressed he didn't fall for the bait. She offers him a chance to bring Wanda back. She says she can't change time but she can bring the dead back from being 'dead.'

Retrieved from "https://imagecomics.fandom.com/wiki/Spawn_Vol_1_254?oldid=55284"
Community content is available under CC-BY-SA unless otherwise noted.