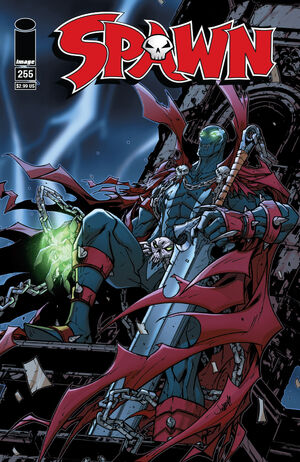 Satan's demon is impressed that Spawn refused to alter time as he understood the impacts it would have on the future.[1] She offers him a deal. She tells him she'll return Wanda Blake to him, unharmed and without strings to be his wife once more if he agrees to give them his Symbiote Suit and agrees never to step foot into Hell again. Albert wraps his suit around her and transports her to the Dead Zone. He tells her he does his best thinking here. He uses the nullifying effects of the dead zone to then slash her arm off and hold her against the wall by her throat. He uses his suit to slash her face and forces her to show her true form as a demon. He tells her that she has it wrong. He'll come to Satan when he's ready, and it's Satan that should be hiding.

Later, Spawn heads to Wanda's funeral where Terry Fitzgerald and his children watch. He later approaches Terry and asks him where Wanda was headed the night she died. Terry at first resists and worries Spawn just wants her for himself. Spawn in return places a protection spell on Terry and his family and tells him that demons will never harm him again. Terry gives up the information she was on the way to some TV interview and Spawn takes off to investigate the station WRRZ.

In Hell, the demon helper approaches her master Satan. She informs him that Spawn has injured her and that he will be gunning for him next.

Spawn continues to discover his new powers using his big-ass colossal sword to defeat his enemies.

Retrieved from "https://imagecomics.fandom.com/wiki/Spawn_Vol_1_255?oldid=67669"
Community content is available under CC-BY-SA unless otherwise noted.